Jimi Hendrix The greatest Guitar player of all time? Even by Rolling stones recent calculation of the top 100 guitar players

http://www.rollingstone.com/music/lists/100-greatest-guitarists-20111123 this legend stands alone. But regardless of what criteria you choose to measure, his impact on music and style is undeniable. Without doubt, Jimi was the most captivating character of the decade. More than any other artist from the era Hendrix was a cultural icon, he truly exemplified the art and attitude of the 1960's. His innovative style, his laid back persona, his wardrobe, his lifestyle, his message and his music all add up to the status of deity in Rock and Roll mythology

Musically, Hendrix was an innovator beyond compare, creating with an electric guitar what had never been previously imagined. A gifted songwriter and a virtuosic player all added up to musical genius. His mastery of the fret board , control of feedback, and use of state of the art effects created a signature sound that many have imitated but never recreated. He left a wake that is still being felt today . His tragic early exit left fans wanting more and left the world wondering what if…

At the pinnacle of rock and roll collectibles as well , Hendrix memorabilia demands top dollar and sets record level values at auction. His impact on the poster-collecting world is well proven also. Hendrix posters are some of the most valuable and sought after in the entire genre.

This month we are offering a small, focused selection of Hendrix posters, with the crown jewel being an ultra rare (one of three known) 1969 cardboard Miami Jai Alai poster that is sure to end up in the most advanced collection. So, Enjoy this opportunity to bid on these artifacts, the winning bidders will surely be overjoyed. 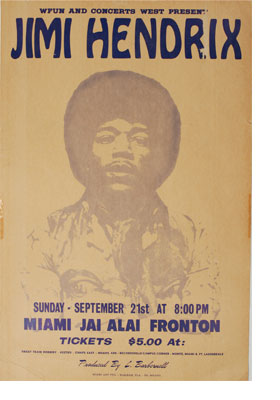