As mentioned in our previous posts, we at The Psychedelic Art Exchange come to our appreciation of concert poster art not only as collectors, but as true fans of the live music experience.

This time of year provides music lovers like us with several opportunities to take part in the wide array of music festivals across the nation. Today's Festival goers have many exciting options from which to choose. Examples of these well organized and music packed events include the widely eclectic and sprawling Bonnaroo festival, Northern California's High Sierra Festival, The Gathering of The Vibes in the Northeast, and this coming weekends' offering "The All Good Festival," which takes place at Marvin's Mountaintop, Masontown West Virginia.

In many ways, the seeds that were sown in the 1960's ballroom scene have blossomed into today's "Jam Band " festival scene. The spirit of the music and community that emerged from San Francisco in the sixties is still present at these festivals. Performers and attendees alike are cut from the same cloth that was woven in "the day". The ideals of artistic individuality & creative freedom paired with playful exuberance are ever present at these joyful gatherings.

PAE will be at the All Good this weekend and invite any of our fellow posters collectors to join us for a beverage at the festival. Please feel free to contact us for times and locations. 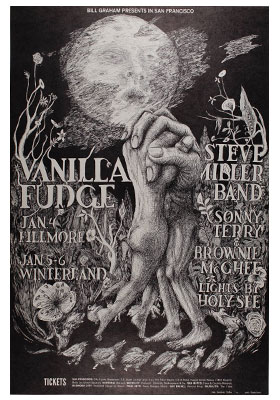 It's not often that one can know what is going to happen in the future, but this just happens to be one of those special times.

On August 15th, the world will be celebrating the 40th Anniversary of the Woodstock Music and Art Festival. Every major newspaper, magazine and television network will be commemorating this historical event. This increased media coverage is sure to drive interest in our special corner of the world--1960's Psychedelic Rock Concert Posters. Sometimes it can be easy to feel isolated and alone, the sole enthusiast of an esoteric subject. But make no mistake about it, the world will soon once again embracing the memorabilia attached to the most significant social movement of the 20th century.

Two years ago we saw a tremendous surge in activity and a corresponding increase in values as the world commemorated the 40th Anniversary of the Summer of Love. This summer is sure to be a repeat on an even larger scale.

Psychedelic Art Exchange was pleased to sponsor a special Woodstock party in Park City, Utah last weekend, where over 200 everyday people of ALL AGES AND BACKGROUNDS arrived fully clothed in tye died T-shirts, leather fringe jackets, leather sandals (or no shoes at all) and baby doll dresses.

The highlight of the party was a showing of the Woodstock Concert movie. It was amazing how strongly the music resonated with the party goers. There can be no doubt that this music, these values, and this historic artwork will continue to increase in historic significance with each passing year. That is why we and our clients believe so strongly that 1960's Psychedelic Rock Concert Posters represent the most lucrative ground floor opportunity in collectibles today.

A big wave is coming, enjoy the ride! 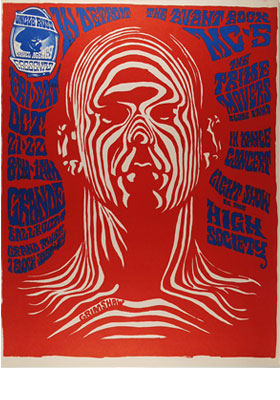 Last week the national media once again spotlighted the exploding market for Vintage Concert Posters with the news that a new feature documentary film, American Artifact: The Rise of American Rock Poster Art has just been released. The article was one third of a full page with several large, full color photos. This news comes right on the heals of the major Denver Art Museum exhibit, and will be followed with intense media coverage this summer of the 40th Anniversary of Woodstock. You can read the article here

We are currently seeing a very active market for the most desirable posters with early posters in Mint Condition bringing extremely strong prices over the past several months. The most attention is being directed to the posters that we have targeted for acquisition in our special report "Insider Secrets of The Psychedelic Art Market." This report can be downloaded free at our site.

In other news, CBS Marketwatch last week featured an article on the intense interest in alternative investments. Savvy players are placing their assets into tangible collectibles that cannot fall in half overnight and should increase along with the rate of inflation. You can read that article here:

We are currently cataloging a pristine collection we just acquired, to find out what pieces we have available, call Glen Trosch at 410-464-6180.

PAE In The News

Psychedelic Art Exchange has been fortunate enough to garner a lot of attention in the media lately. Please check out the print, radio and television interviews that have recently been posted. Most websites don't give you the opportunity to meet the principals "up close and personal". Here's your chance to see and meet the people behind Psychedelic Art Exchange. Check it all out here: http://www.concertpostergallery.com/concertposters/about/pae-in-the-news/

An auction you can trust

This past Sunday concertposterauction.com began their 2009 Summer Concert Poster and Memorabilia sale. Concertposterauction.com is the life work of poster dealer Brad Kelly. Brad began his auctions in January of 2006 and is currently hosting his thirteenth sale. Brad has over 16 years of experience and operates one of the finest auctions today. Brad was a longtime trusted employee of Jay Kastor's legendary Psychedelic Solution in New York's historic Greenwich Village.

Brad runs one of the most diverse and eclectic auctions in the world today. Everything from high end one of a kind original art, to obscure psychedelic fliers grace his offerings.

Concertposterauction.com provides an exceptional value to all levels of collector. There are always a few items in gem condition to bid on. Brad is highly knowledgeable, and efficient and has always been responsive to condition requests. He is an honest and ethical dealers and stands firmly behind his product. We at the Psychedelic Art Exchange encourage you to bid with confidence. http://www.concertposterauction.com/